the earth is a better person than me is a visual novel following a young woman, Delphine, who runs away from her life and into a forest. She realizes she can talk to the earth around her: the moon about love, dirt about death, a tree about desire. Each path unearths a different aspect of Delphine’s life as she experiences sexuality, sex, self-image, and death.

I started making this game at the end of summer 2017, after taking a writing romance in videogames workshop at Toronto’s Dames Making Games put on by Natalie Zina Walschots, Kaitlin Tremblay, and Ben Gelinas. I continued developing it in Santa Cruz, California where I wrote, drew, and programmed the first of the 6 paths. In summer 2018, I completed the other 5 paths during an artist residency at 3331 Arts Chiyoda in Tokyo, Japan. I think it is most influenced by my time in California, surrounded by ecosexuals and nature and the most lonely I’ve ever been.

It started as I intend all my projects to start: light, funny, and weird, but it transformed into something much darker, personal. I usually plan out projects and then diligently follow the blueprint. For this one, I tried to let it flow. Many things came out that I didn’t expect. It’s not what I thought it would be but I love it all the same.

It is about experiences of queerness, of psycho-social disability, of living as a woman; it is about our relationship to nature and to ourselves through nature. It is ironic to be creating a videogame about nature, using a medium which material existence is dependent on the extraction and depletion of nature. This irony is embedded in the story, the aesthetic, and the player’s affective reactions in play.

In each path we see a different side of Delphine. She is, of course, partly inspired by myself, partly inspired by those around me, and partly pure fiction. She is a femme woman in her late twenties confused about what she wants and what the world wants from her. I think sometimes you will hate her. It can be very easy to hate the femme especially when she is seen as vain or self-involved or shallow or cruel. Certainly I am often annoyed by her. But I hope you can also see her as funny, thoughtful, and in need of love.

The environment characters are not simply reflections of Delphine. I approached each one trying to think about what dirt would want out of a human being, or how water relates to others, or the moon’s emotional cycles.

The first path I wrote, the moon path, is about love and melancholy, about realizing something about yourself that you’re unable to put into words. It’s about waking up everyday and being confused about who you are and how you’re feeling and why you’re feeling it.

The sun path is its opposite. It’s the manic side to the moon’s melancholy. It’s obsessive and impulsive. It’s about being pulled into a sexual relationship you know is bad for you.

Water explores body image issues and self-love. I think water is an especially interesting character. It’s the most playful and least serious, even when maybe it shouldn’t be.

I cried writing the flower path. It deals with perfectionism and compulsive behaviour. Some of the things in this path I’ve never put into words before. This was a difficult Delphine to write.

The dirt path asks “what good are you to the earth?” It’s about the deep sinking feeling of not thinking you should be alive. You might stumble on this path without knowing.

The tree was the last path I wrote and the only one I made a total re-write to. Though other paths have sex in them, this one is about sex. How do you know what you want? Can you disentangle desire from another’s? What happens when someone is actually nice to Delphine?

I’ve made a few art pieces now that I’ve been afraid to show people. The first film I ever wrote and directed was about eating disorders. I named the protagonist Sara and denied any relation. There are parts of Delphine I see in myself. I’ve had some of the experiences she has had. Others are from close friends or stories or what I see to be an obvious natural progression from the non-fictional into the fictional. Beyond the literality of the piece, I see it as an honest reflection of my emotional mindset of the past few years of my life.

I feel this way. Do you too? 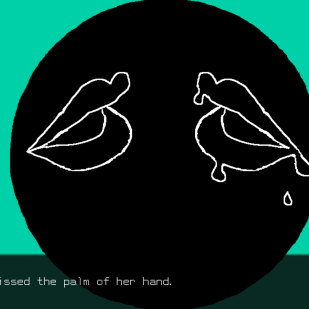 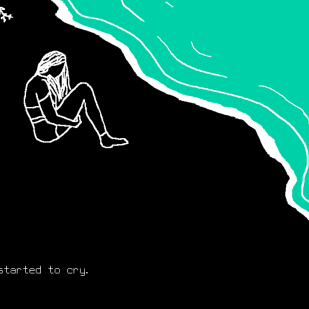 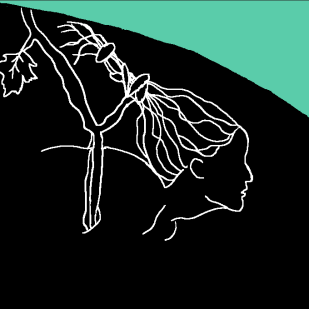